Learn more about this adorable alpine animal…
and why it needs our help!

If you’ve spent time in Colorado’s high country, chances are good you’ve either heard or seen an American pika (Ochotona princeps). Originally from the central Asian steppes, these potato-sized mammals migrated across the Bering Land Bridge and have been calling North America home for the past several million years. Nowadays, American pikas can be found throughout the Rocky Mountains between northern New Mexico and central British Columbia. Populations are also present in the Great Basin and from California’s Sierra Nevada north to the Cascade Range in Oregon and Washington.

In Colorado, American pikas are often easiest to spot in talus – fields and slopes of broken rock – above ~8,000’ in elevation. Keep your eyes open for grayish-brown critters with large ears and no tails. They’ll often be scurrying between the rocks or taking in the view from a particularly prominent perch. Even if you don’t spot one, you’ll likely hear them: they have a distinctive, squeaky  Eep! call that’s particularly loud for such a tiny animal!

Click here to listen to an American pika’s call! 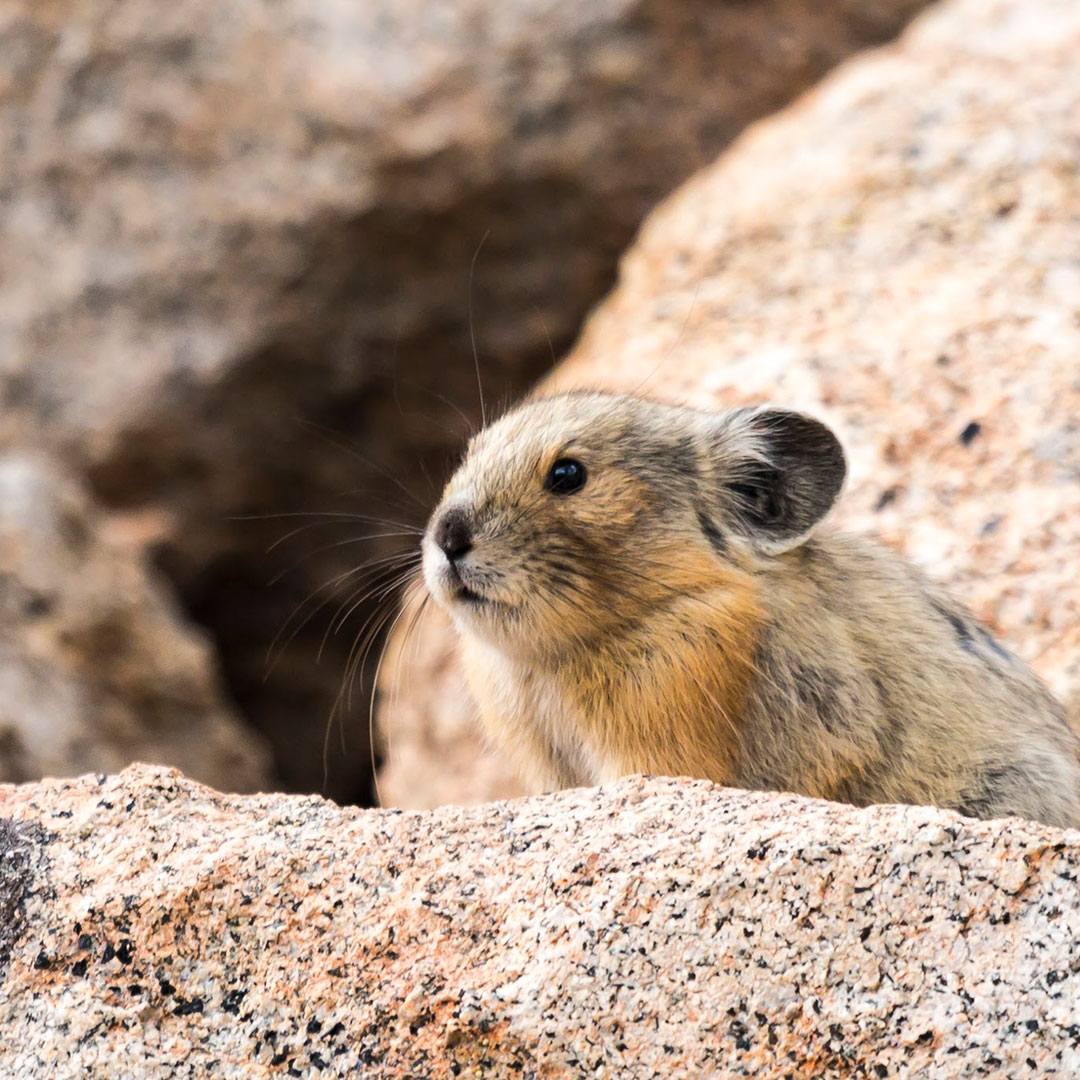 Click on the arrows below for more pika facts!

Pikas are often mistaken for rodents, and it’s easy to see why. They lack visible tails, have large, rounded ears (like a certain famous cartoon mouse), and tend to scramble or bound instead of hop. Despite this, pikas aren’t related to rodents at all: they’re actually  lagomorphs, or one of the smallest members of the same group that includes rabbits and hares!

Unfortunately, the unique traits that allow pikas to survive the extreme alpine winters they face in Colorado and elsewhere aren’t well-suited to warming temperatures.  Learn more about how climate change is impacting American pikas here.

Colorado’s pikas are denizens of the alpine: the high-altitude, mostly treeless tundra that’s frequently exposed to temperatures well below 0°F (-18°C), winds exceeding 50 –  100 miles per hour, and is largely covered by snow for nine months of the year. What vegetation exists is only accessible during the summer months. There’s no feasting for a long winter’s sleep either: like rabbits and hares, pikas don’t hibernate. Instead, they keep warm thanks to an extremely thick fur coat, a high metabolism, and a high resting body temperature of roughly 104.2°F (40.1°C): a life-threatening level for a human! Pikas also take advantage of the deep snowdrifts that cover their preferred talus habitat, which provide additional insulation against the cold by keeping temperatures beneath the talus around a relatively balmy 32°F (0°C).

Pikas have an ingenious adaptation for surviving the winter months without access to fresh food. In Colorado, pikas will spend most of the summer collecting grasses and forbs (flowering plants) from nearby alpine meadows and then laying them out to dry in organized collections tucked in amongst the talus. These so-called “haypiles” serve as the winter food cache for each pika: its lifeline to survive until the next summer. Because of this, pika territories and haypiles are defended fiercely!

It’s worth investigating talus fields for pika haypiles later in the summer and in early fall. You’re likely to spot the owner nearby, running back and forth with fresh grass and flowers in its mouth. Pikas will make up to 14,000 foraging trips in order to collect enough food for the winter. Given that most alpine summers last only 8 to  10 weeks, that’s an average of over 200 trips per day!